We’re delighted to announce the winners of our art competition for HMD 2014 – Drawing Inspiration. Entries were made in three ages categories, all with a different focus around the theme for HMD 2014 Journeys. 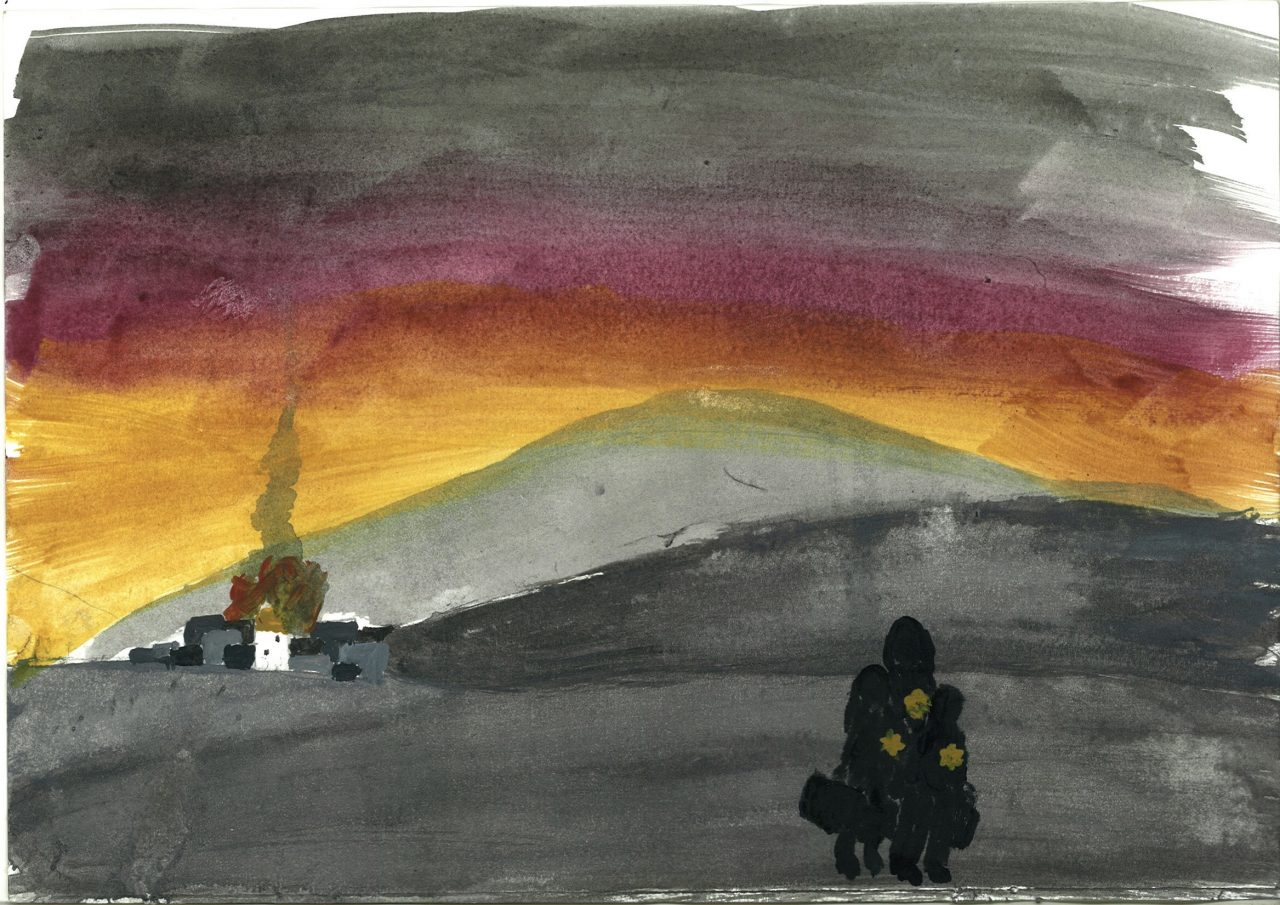 Ages 7 – 11 looked at the experience of journeying on the Kindertransport, and ages 12 – 18 looked at forced journeys and journeys of escape. The over 18s looked at journeys of genocide.

Winning entries, alongside the runners up for each age category, are on display at our Drawing Inspiration art exhibition at the A-side B-side gallery in Hackney.

Kim says ‘My artwork is in colour and shows five children. They all have identity tags. They are at a train station but on the other side is a shipyard. The children are upset – they have to leave their parents, and their family are at war, and they are worried they might not see their family again.’

The judges loved the detail and use of colour in Kim’s artwork. She has captured the emotion of the moment of saying goodbye in a very effective and sophisticated way that shows a lot of empathy and understanding.

Ryan says ‘My artwork shows the journey through the horrible atmosphere in Germany and Europe and how Jewish children had to make their way through to London to become legal members of the society, and were from then on treated with respect.

The judges were impressed by the structure of Ryan’s artwork – showing the atmosphere in Germany and then the UK on either side of the journey of escape. This is a mature idea, and he has drawn the different elements with a lot of artistic skill.

Lujine says ‘My piece of artwork features four siblings (young escaped Jews) looking over the hull of the ship which is now transporting them to their new home where they would be safe from the danger of the Nazis. As they are looking around them they begin to see hope represented by the rays of sun or light protruding from behind the landmarks from London and the people.’

The judges praised how Lujine has represented hope in this image, and shown the positive side of the story of Kindertransportees arriving to safety. The use of symbolism within the image is very strong, with the rays of light, the choppy sea and the signs in the background.

Charlotte says ‘My piece of art is on Kristallnacht – the night of broken glass. You can see the synagogue burning in the background. There are three people escaping – a mother, a daughter and a son. They are all Jews who have seen the streets glitter with glass and the synagogue burn. They are all wearing the Star of David which was enforced during the Nazi period.

These Jews are all carrying suitcases full of the valuables and food they might need on their journey of escape. The dawn in the background is the colours of the German flag to show their location but also to show a new age of the dictatorship of Hitler.

The judges found Charlotte’s artwork very moving, and loved the thought she had put into her use of colour, and the story she is telling. The family in silhouette, identified only by the Stars of David is a clever way of showing how the Jews were losing their identity at this time.

Runner up, Hannah Martin Hedy’s Memories of the Holocaust

Hannah says ‘My artwork was inspired by the story of Hedy and her memory book. I wanted to use an image of a girl as a central image and show a sad emotion in her face, revealing how she felt whilst being a part of the Holocaust. For the writing I used some of herown story in my own image. I used charcoal pencils to create my work and I thought it was effective in creating a sombre mood, and reflect the emotion in the story.’

The judges loved Hannah’s use of the story of Hedy’s memory book, and how she has successfully created an eye-catching, sombre and delicate piece of art. The face depicted is haunting.

Runner up, Pagan Young The Bear

Pagan’s visit to Auschwitz was a special journey, as she had inherited a Bear that belonged to a survivor. The bear was somehow given to Pagan’s great aunt when she was a child in Auschwitz. The story is unclear as to how the child and bear survived but Pagan was able to take the bear with her, back to Auschwitz. The piece The Bear is part of a graphic novel Pagan is creating, that shows the journey of the survivor through the bear’s eyes.

The judges agreed that Pagan’s artwork is beautifully created, and very emotive. They loved how Pagan has created the effect of the image wearing away – it seems delicate and transitory. The story behind the bear in the image is very powerful, and personal to Pagan herself.

Emma says ‘As long as we observe genocide and its effects from afar, the reality of the horror will remain a comforting abstraction to us. The image portrays a movement of people on the landscape but because we keep our distance, we cannot see clearly what is happening – just shapes in the distance, barely recognisable as human. The abstraction of the human figures and ink effects is an attempt to try to express the unimaginable suffering that occurred. The figures are also abstracted so that they represent people from all genocides. Lastly, the real point behind the work is the question – by not getting nearer to the situation and seeing more clearly what is happening, are we helping it to continue? In this modern day, there is no such excuse as ‘we didn’t know’.’

The judges unanimously agreed that this piece is eye catching, intriguing, delicate, and draws the viewer in, and that the concept behind it is very powerful. Emma’s technical skill and creative vision made this image stand out as a winner in this age category.

Mary says ‘This picture is an Aquatint made by painting successive layers onto a metal plate to create a variety of tones. It shows a man running for his life. He has broken away from a forced march. Retribution is likely to be swift and final.’

The judges felt this image was stark and visually very strong. Sabine Unamun described it as ‘A journey you don’t want to be on’, and all the judges felt that Mary has used interesting techniques to create this piece, adding layers and depth.

Anne says ‘I made this observational drawing in the Holocaust exhibition at the Imperial War Museum, London. I worked from a glass case full of abandoned shoes, which had belonged to people who perished in the Holocaust. Shoes represent the individuals who wear them and their journey through life; they are shaped and formed by the feet of their owners. So to preserve them is to acknowledge each life and the end of their journey. I drew with charcoal on cartridge paper. Charcoal as a medium has a very tactile quality and in this drawing I spread the charcoal thinly with my fingertips. I had the feeling of trying to touch the surface of these shoes as I drew them. Drawing personal objects, like recording people’s stories, is another way of remembering and cherishing each life.’

The judges praised Anne’s delicacy and accuracy in her artwork. They felt this piece was very poignant and creates an emotional response in the viewer.

We had almost 100 entries to the art competition this year and the quality of submissions was very high. A big thank you to everyone who took part, you’ve now contributed to our online exhibition for Holocaust Memorial Day.