Today the United Kingdom assumes the Chair of the International Holocaust Remembrance Alliance (IHRA). IHRA is the organisation which evolved from the Stockholm Declaration of 2000 – the international agreement which instituted Holocaust Memorial Day across the world and committed its signatories to preserve the memory of those who were murdered in the Holocaust.

Each year a different member of IHRA assumes the Chair of the organisation. Sir Andrew Burns, the UK Envoy for post-Holocaust issues, will be leading IHRA over the coming year, chairing international meetings in London in May and Manchester in December.

Sir Andrew spoke at the UK Commemorative Event for Holocaust Memorial Day on 27 January, he said: ‘The images conjured up for us today have been of families uprooted and herded across Europe to a brutal end; of children separated from their families on Kindertransport; of death marches and the occasional brave escape over mountains and rivers; of floods of emigrants struggling to find a better life in new lands. 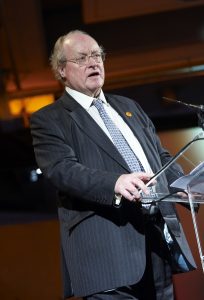 ‘These are the images that brought governments together in Stockholm in the year 2000 to remind the world that the Holocaust was such a catastrophe, such a collapse of civilisation that it should never be allowed to fade into history but must remain at the front of our minds.

‘As a warning of what happened once and could happen again, unless we all learn the lessons and stand firm against prejudice, antisemitism (anti-Jewish hatred), racial intolerance and xenophobia.

‘Next month the United Kingdom will take over the chairmanship of the International Holocaust Remembrance Alliance, known as IHRA.

IHRA grew out of that Stockholm Declaration and is committed to furthering international cooperation on Holocaust education, remembrance and research; to fighting the evils of Holocaust denial and denigration; and to doing all it can to ward off any future genocides.

‘This country leads the way internationally in the rich variety of the ways in which we commemorate the Holocaust, and not only the Holocaust but also the terrible events in other countries which have experienced genocide and ethnic cleansing since 1945.

‘As we work together we must always understand how difficult and traumatic it often still is for people across Europe to face up to what actually happened. We are all making journeys of historical discovery and national self-understanding as well as pilgrimages of sorrow and regret.

‘Our treasured survivors play a critical part in passing on their experiences and their wisdom to younger generations. As we gather on Holocaust Memorial Day we know we are joining millions of others around the world who are reflecting in their own way upon the significance of that terrible time.’