In a blog for Holocaust Memorial Day 2017, HMDT's Education Officer Andy Fearn reflects on some of the resources available to help educators explore the theme: How can life go on?

On 27 January each year we mark Holocaust Memorial Day (HMD). It’s a time for everyone to pause to remember the millions of people who have been murdered or whose lives have been changed beyond recognition during the Holocaust, Nazi Persecution and in the genocides that followed in Cambodia, Rwanda, Bosnia and Darfur. The theme for HMD 2017 is How can life go on? This theme asks us all think about how people who have experienced the horror of genocide can start to rebuild their lives after experiencing loss on such a huge scale. It encourages us to consider how communities and countries can heal after genocide and what role we in the UK have towards individuals, communities and nations who have survived genocide.

Since last January, a heart-breaking twelve months have again seen our TV screens and newspaper pages filled with images of refugees fleeing war and persecution on an unprecedented scale. When thinking about how we could represent How can life go on? through our education resources, the refugee crisis was an obvious starting point. Many of those we see making terrifying and dangerous journeys are fleeing the ongoing Genocide in Darfur and the question of how life can go on is bound up with where it goes on. With so much confusion and misinformation surrounding refugees and the reasons for their displacement, we felt this theme offered the opportunity for people to better understand refugee experiences, both past and present. We can also consider our responsibilities in supporting those fleeing violence that most of us are lucky enough to be unable to imagine. There is much we can do to assist people who were once refugees – rebuilding can be a lengthy process.

For this reason, many of the education resources such as lesson plans and assemblies that we have created for educators to use on and around HMD 2017 focus on Darfur and stories of those who have been forced to flee genocide. At Holocaust Memorial Day Trust, the victims of genocide, survivors and their stories are at the heart of all that we do and our education resources always aim to reflect that. We set about thinking on how we could best engage young people with refugee stories. Our friends at Waging Peace offered us an answer.

In 2007, a researcher from Waging Peace conducted a fact-finding mission to eastern Chad, in part, to collect testimonies from Darfuri refugees. While collecting testimonies from adults, women told the researcher how their children had witnessed horrendous events when their villages were being attacked. This prompted the researcher to talk to the children. She gave the children paper and pencils and asked them what their strongest memory was.

When the children handed the researcher their drawings, she was shocked. The majority of the drawings show the children’s memories of their villages under attack from Sudanese Government forces and their allied Janjaweed militia. Many of the drawings depict civilians being brutally murdered or taken prisoner, women and children being subjected to sexual assault and indiscriminate bombing.

These powerful and emotive drawings form the starting point for lessons and assemblies which ask students to consider not only what is taking place in the pictures but what effect such trauma must have on the young people who drew them. Students are asked ultimately to think about their own responsibilities in supporting people who are the victims of such violence to re-build their lives. 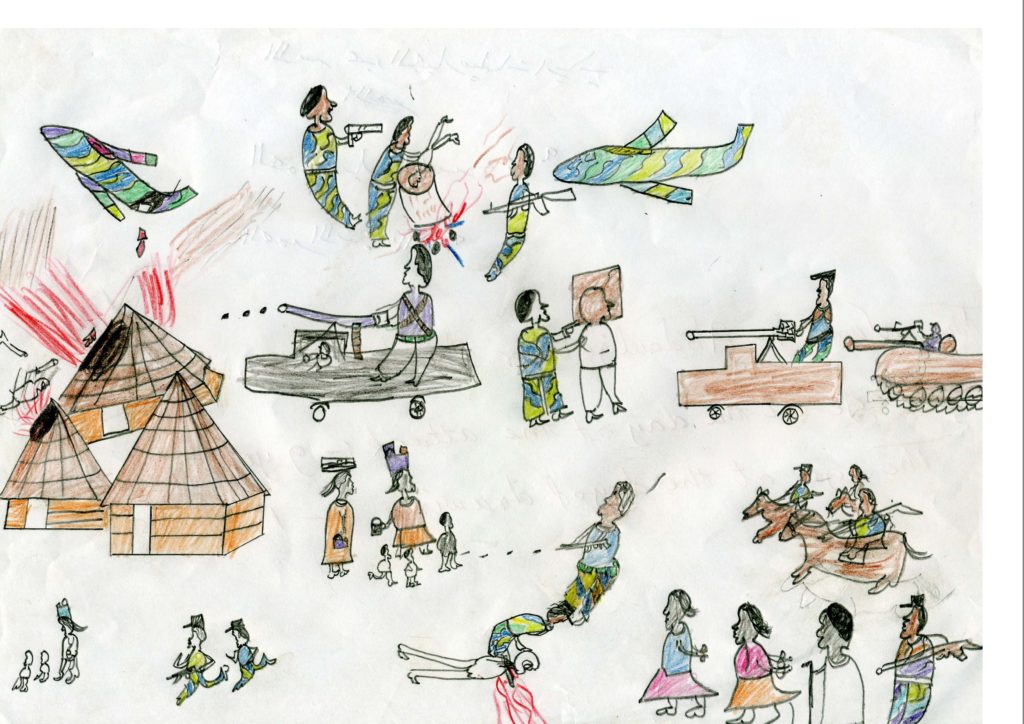 Picture drawn by a Darfuri boy who was nine years old when his village was attacked by Janjaweed and government forces in 2003, courtesy of Waging Peace

This year we have also been inspired by the words of Nobel Peace Prize winner and survivor of the Holocaust, Elie Wiesel, who sadly passed away in July. In a speech he gave in 1982, on surviving the Holocaust he said ‘For the survivor death is not the problem. Death was an everyday occurrence. We learned to live with death. The problem is to adjust to life, to living. You must teach us about living’.

Those words ‘you must teach us about living’ really stuck with all of us.

Our work requires us to spend a lot of time teaching about how and why genocide happened. We focus on how and why people were murdered whilst often giving little thought to how they lived. I asked myself, ‘how is it that I know so much about the Holocaust but so little about Jewish festivals, food or beliefs? Why do I know so many details about how people were murdered in Cambodia 40 years ago but don’t know anything about how the country has re-built since? Why can I explain to somebody the history of the ongoing genocide in Darfur but can’t tell them about the music the victims listened to, or any of the words that they spoke?’

We realised that to teach about living we need to celebrate the lives of those whose deaths we commemorate. We pledged to learn about the cultures and practices of those who were murdered, and who survived. We have learned about food from Jewish culture and Roma culture, from Cambodia, Rwanda, Bosnia and Darfur and put some of our favourite recipes into recipe cards for everybody to try at home or at school. We’ve also worked with a Rwandan dance group to learn a traditional Rwandan dance and to make a tutorial so everybody else can learn too.

Of course there are loads more education resources that anybody can use to engage with HMD this year. We’ve created a new interactive site with lessons on genocide and the Holocaust that can be used to teach in a classroom environment or can be used individually. We have life stories – short accounts of the lives of victims, survivors, witnesses and rescuers. There is a national arts project and accompanying education resource calling on everybody to engage with the theme through arts and so much more!

No matter how big or small, we hope everybody will do something on or around 27 January to mark Holocaust Memorial Day, to remember all those who have been the victims of genocidal violence and to commit to supporting those who have survived.