Josh Whatsize, Lead HMD Youth Champion, on why it’s so important for young people to be the driving force behind Holocaust Memorial Day.

About five years ago I was sat in a classroom where we were learning about at the Holocaust and Hitler’s rise to power in Germany. I already had some knowledge on this subject through past research as I have always had a keen interest in it and I relished the chance to learn more. I remember some of the students knew bits like me, some who knew nothing. I remember vividly how after just an hour our teacher said it was the end of the lesson and that we would be going onto something new next week. We had one hour within five years of teaching which covered this devastating and monumental moment in history. I felt cheated, not just for myself but for the millions who suffered, for the many stories that could have been re-told, told in order to impel us, to empower us as young people to learn more about this dark period of history. It left me wondering if the others in that lesson were also moved emotionally and it left me wanting to know more.

I did just that, and when I was at college I was given the opportunity to visit Auschwitz-Birkenau. When I was there I was hit by a pure passion, a determination to inform others. As I walked out of the camp I vowed that I would never stop telling young people about what had happened, what atrocities continue to happen in the modern world, that I would do my utmost to stimulate them to go on and tell other people, and future generations. I was moved and angered when I was told such atrocious stories, stories of despair, loss and hurt but also encouraged and inspired by ones of hope, determination and courage. Not only was I moved by the stories relating to my visit but also shocked to realise how many times genocidal crimes have taken place since the Holocaust. 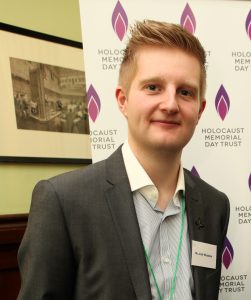 Since that visit and since making that vow I have done my utmost to inform as many people as I can. In the past two years I have spoken to over 1,500 students from all different backgrounds and abilities; from junior school pupils to A-level students, health and beauty students and students with learning difficulties. I have been fortunate to speak to such diverse groups of young people but the two things that each group says no matter what, are ‘I never knew humanity could be so cruel‘ and ’I didn’t realise that genocide has happened so many times since the Holocaust’. Those two comments remind me why it is imperative to continue making young people and future generations aware and informed about the atrocities of the past. The work that I do with HMDT allows me to speak to Holocaust and genocide survivors in person, something that is hugely inspirational. They have a passion in telling their stories and a desire that young people will go on to tell others, ensuring that in years to come they will not become a piece of history but testament to the destructive capabilities of human kind.

I have spent the past two years as HMD Lead Youth Champion inspiring more young people to get involved in Holocaust Memorial Day. To commemorate Holocaust Memorial Day myself and create an emotional impact, I wanted to take a creative approach. I wrote The Fuhrer Will Now Speak a verbatim piece using the words of Holocaust and genocide survivors. I directed a cast of young actors from the Nuffield Youth Theatre in Southampton using the script I had written. The play went on to be performed to sell out audiences for a number of evening performances. Those involved were engaged throughout, wanting to act but also learn about the piece, the history behind the events mentioned. The response from young people in the audience too was hugely moving and just emphasised further that young people are engaged, they want to learn from the past and most importantly they know how important it is to remember.

It is vital in my view to encourage young people and future generations to remember but most importantly take action in challenging hatred and discrimination today. Some may think that young people are put off by this subject, see it as just black and white. Yet those who think that are wrong. So many young people especially at University ask me about HMDT; ask me what it is I do and when I tell them, they are interested and want to know more. That enthusiasm is there and I feel it is crucial in encouraging them to act. It is mirrored through the reaction to the HMD Youth Champion Programme at HMDT. The young people participating in this do not just want to learn they want to act, and are aware of their significant role in inspiring others to remember.

Whilst at University in London studying Drama and International Relations I look to continue writing pieces that will help to inform new audiences about the past, by combining my two subjects together as well as continuing to write and direct pieces that will hopefully move and inform audiences, going some way I hope, in making sure those stories, those journeys, those acts of courage and determination, those acts of hope, are never forgotten.

The HMD Youth Champion programme is for young people who are passionate about making a difference. The programme empowers young people to create their own HMD activities, and challenge contemporary hatred and discrimination by learning from the past and raising awareness amongst other young people.

If you are aged 14-24, and are in interested in becoming a HMD Youth Champion, then email us at [email protected].

The views expressed are those of the author and do not necessarily represent the views of HMDT.