Education Officer Dr Rachel Century reflects on the HMD theme and her own personal journey.

When I started university, I found myself constantly having to answer the question 'why is a Jewish girl studying German?' No one asked the Jewish boy studying Italian why he had chosen that subject, the Jewish boy reading French wasn't ever challenged, yet I had to justify my choice. At the time, other people found it difficult to accept that I was genuinely interested in German literature, history and even enjoyed visiting Germany. On occasion, I even questioned my own decision. Yet now, I am immensely grateful that I stuck with it, that I successfully completed a degree in German Studies, including living in Berlin for one year. As I am fluent in German, I was able to subsequently undertake a PhD in Holocaust Studies, and, living in Germany once again, was able to engage with primary sources. I researched and wrote about female administrators of the Third Reich, adding to our existing understanding of the role gender had to play in the Holocaust, and the contribution of ‘ordinary’ German women. 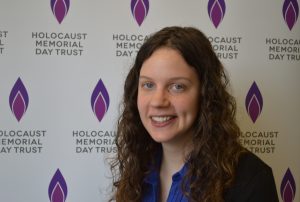 My PhD, coupled together with previous employment, internships and voluntary work, has led me to become the Education Officer at the Holocaust Memorial Day Trust. The theme for Holocaust Memorial Day 2014 is Journeys, and our online action encourages everyone to take a step. Together with the rest of the HMDT team, I have been writing lesson plans and assemblies for teachers, educators, schools, any interested party in fact, to use to teach about the Holocaust in association with Holocaust Memorial Day. These educational resources use the theme of Journeys to explore the life stories of Holocaust survivors, those who suffered Nazi persecution, and survivors of subsequent genocides, in Cambodia, Bosnia, Rwanda and Darfur. These resources are designed to help those who want to mark Holocaust Memorial Day and commemorate the Holocaust, Nazi persecution and subsequent genocides. There are plenty of theme-specific activities and suggestions, which complement existing material, so even those who have marked Holocaust Memory Day before can find a new angle, a new story, something to inspire them and their students.

I have personally been engaged in Holocaust studies for the past ten years or so - in fact, ever since I volunteered at a former concentration camp, where I was able to use my German for 'good', translating educational materials, and war-trial documents. This experience helped me come to terms with the fact that I was a Jewish girl studying German and inspired me to learn more and want to teach about the Holocaust. But how could I ensure that the resources I was writing for Holocaust Memorial Day would inspire teachers, and encourage them to teach about the Holocaust and subsequent genocides that have occurred - have been allowed - to occur? Most people grapple with the sheer numbers involved in the Holocaust – an estimated 6 million Jews were murdered – and the subsequent genocides – for example 1 million people were killed in Rwanda in just 100 days. These numbers are incomprehensible to us.

But by looking at individual life stories we can all grasp a better understanding of what happened to individuals in the Holocaust and subsequent genocides. We can find out how one person, one family, one village was affected, how their lives were irrevocably turned upside down and we can bring their names, their voices and their stories back to the fore, recapturing what their persecutors tried so hard to destroy. Most genocidal regimes purposefully and consciously dehumanised their victims. By sharing the memories and testimonies of individuals, of both victims and survivors, we are able to humanise them and restore their identity.

Through an examination of the journeys that people were forced to undergo as part of a genocide, we can all learn more about the genocides. All of the life stories that the HMDT team have explored for HMD 2014 are fascinating, inspiring stories, with life-changing journeys, which we hope will inspire you to share them with others around you.

You could say that I have been on my own journey, a journey of discovery, and hopefully I have taken a step to challenge prejudices, and shown that not only is it ok for someone Jewish to study German, but also that some good can come of it!

All views expressed are those of the author and not of HMDT.