April 2019 marks the 25th anniversary of the Genocide against the Tutsi in Rwanda. In this blog, students from Hampton School reflect on the impact of meeting Sophie Masareka, a survivor of the genocide. 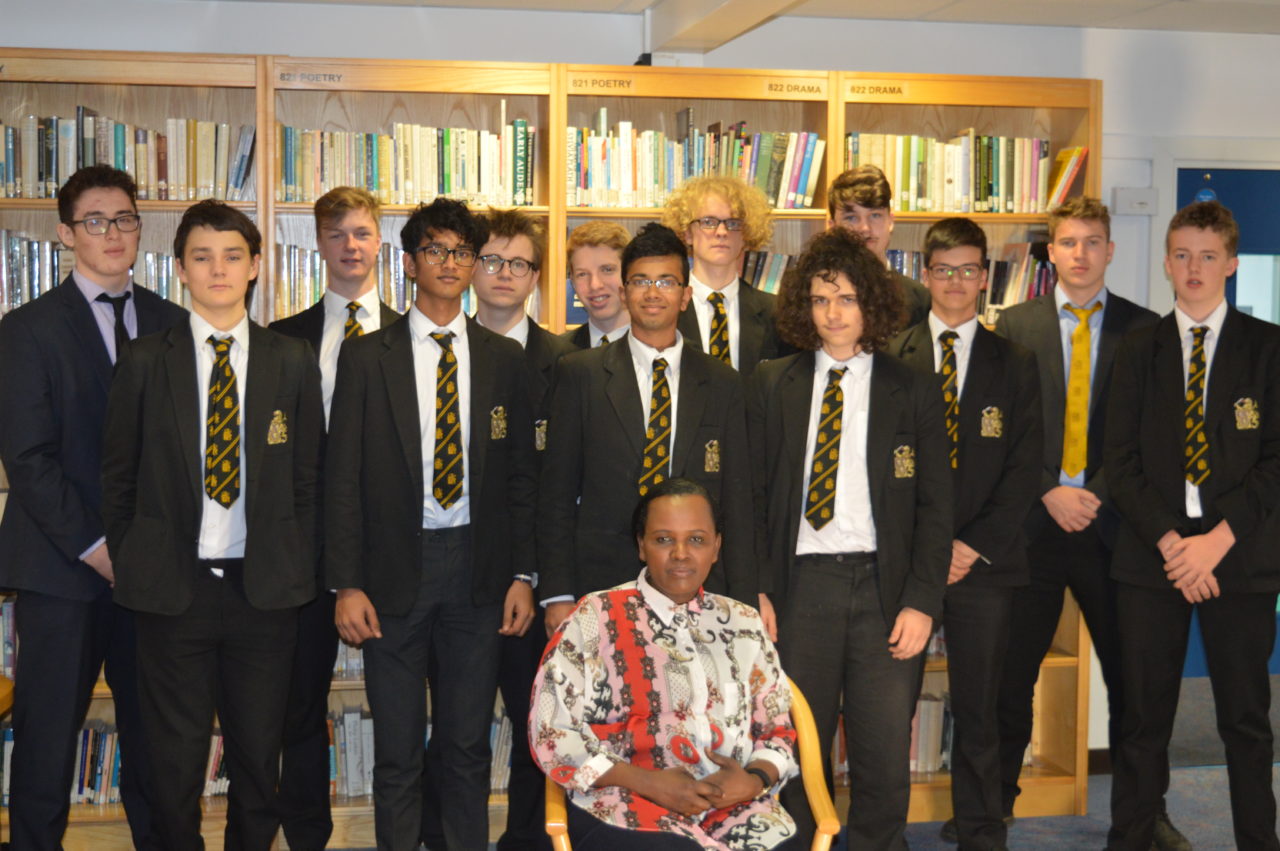 I feel happy when I come to speak to you and people learn a lot from my story. It helps me to move on.

These were the words that Sophie Masereka, a survivor of the Genocide against the Tutsi in Rwanda, left us with at the end of her visit to our school a few weeks ago. Sophie’s strength and optimism inspired us to team up with students from two other schools that Sophie had also visited, in an effort to help young people learn more about the genocide 25 years ago.

Over 100 days in 1994, extremists from the Hutu majority in Rwanda instigated a campaign of horrific violence aimed at the Tutsi minority, which resulted in the murder of around one million men, women and children. The genocide was the culmination of a long period of discrimination, dehumanisation and persecution.

In 2015, students from a group of 15 schools, including Hampton School, asked more than 800 11 to 16-year-olds how much they knew about genocides other than the Holocaust. The results showed that the Genocide against the Tutsi in Rwanda is not widely known about in schools across the country, with only 13% of students polled having heard of it at all. Maymuna, a Year 10 student from Westminster Academy, was ‘Horrified, both at the scale of this atrocity and how I had never learnt about it in school before or on the news.’

Sophie Masareka’s story of survival had a big impact on all the students who heard her speak.

‘Sophie was so brave to keep fighting for life. It was really horrible learning about the things that people are capable of doing to other people.’
Sean and Zac, Year 9 students from Turing House School

The students have been inspired to take action after hearing Sophie’s story. At Hampton School, we have created a textbook and activities that teachers at the school will be able to use. We have also been tweeting about Sophie’s story and are creating a page of resources on the school website that we hope will help others learn about Sophie’s experiences and the Genocide against the Tutsi in Rwanda.

‘We feel, as students, that we have some responsibility to ensure that young people get to know about the atrocities and by playing an active role in raising awareness of genocide, we hope that genocide can be, eventually, put to an end.’
Pravin and Freddie, Hampton School

At Westminster Academy, Sirad, Maymuna, Amiya, Akasha and Tayeba are working hard to raise awareness in their school and local community. They have created and delivered a presentation to the entire student body. They have also given a speech to all their teachers and written an article for the school newsletter.

‘We came out of Sophie’s talk knowing we were now ambassadors and that we had to educate both young people and adults. Our next step is to help our teachers plan a new scheme of work, so we can learn about it as part of our school curriculum.’
Sirad, Westminster Academy

Students at Turing House wrote letters to Sophie telling her about the impact of her talk. Some of the letters were featured in the school newsletter, and read by hundreds of students and parents.

The students are joining Sophie in Parliament on 3 April to present to MPs and Peers. Lord McConnell, who is chairing the meeting, says:
‘It is difficult to imagine the brutality and horror of the genocide that took place in Rwanda in 1994. But it is vital that we remember both the genocide and the years of preparation that led to the systematic killing of almost 1 million people in 100 days. The lessons in genocide prevention and in our collective responsibility to protect others must be reinforced year after year. The crimes against the Rohingya in Myanmar and the Yazidis in Iraq make this 25th anniversary of the genocide in Rwanda an important moment for everyone, everywhere, to realise that we must do more to stop this ever happening again.’

We all hope that our presentation will inspire the audience to help spread the word about the dreadful events of 1994.

‘We think it is so important for society to remember not just the horrific events that occurred, but also to remember and focus on the individual stories, rather than the numbers and statistics.’
Amiya, Westminster Academy

Learn about the Genocide in Rwanda, which took place over 100 days in 1994.