This blog, written for HMDT by George Mullens, explains the background of the genocide in Darfur, and why it is still ongoing 15 years after it began. 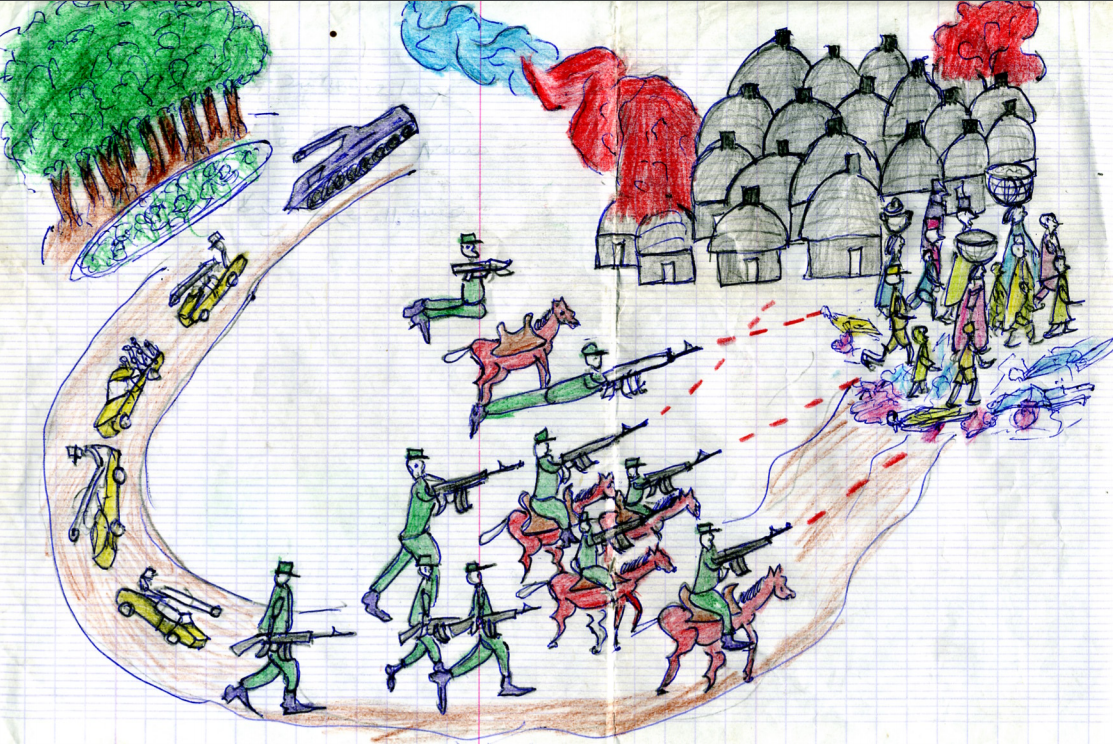 Waging Peace, a member of the HMDT Partnership Group, is an NGO that campaigns against human rights abuses in Sudan and supports Sudanese refugees to build meaningful lives in the UK.

15 years of genocide in Darfur

While Sudan has been in a state of crisis for decades, the genocide in Darfur, a western region of Sudan, began 15 years ago and continues to this day. This armed conflict has seen the ethnic cleansing, sexual violence, and scorched earth campaigns which characterise the worst genocides in modern times.

Genocide Watch estimated in 2015 that approximately 500,000 Darfuris have died in the conflict, with UN estimates indicating that over 4.7 million Darfuris rely on humanitarian aid. Much of Sudan’s population lives in poverty with the UN’s Human Development index ranking Sudan 165th out of 187 member states.

The genocide has been characterised by government-backed ethnic cleansing, as well as ineffective governance and conflict over resources. Omar al-Bashir, the President of Sudan, is the first sitting head of state to have been indicted by the International Criminal Court (ICC) for genocide and crimes against humanity.

How the genocide began

The majority of Sudan’s population lives in urban areas in the north, which is largely Muslim and Arab, whilst Christian or animist African farmers make up most of the southern population. The Sudanese population is a mixture of local indigenous groups and Arab migrants who speak over 130 different languages and 500 different dialects. While tensions have existed, this escalated in the last thirty years with pressures from desertification and drought bringing conflicts over livestock, resources and water.

In 1989, Omar al-Bashir came to power in a coup that intensified the ongoing conflict with the South. From the time of the split between Sudan and South Sudan in 2011, Bashir led a violent campaign against groups in the Nuba Mountains and Blue Nile State, which has resulted in the deaths of at least half a million people.

In February 2003, two Darfuri rebel groups formed from local populations of Fur, Masalit, and Zaghawa tribes. They began to attack government targets after decades of government abuse and historic inequalities in Darfur.

As a response to these attacks, a government-supported militia called the Janjaweed, literally translated as ‘the devils on horseback’, was created to attack civilian populations.

Waging Peace and the children’s drawings 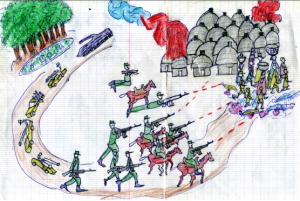 These images are from Waging Peace’s collection of 500 Children’s Drawings that were collected by Anna Schmitt, a researcher from Waging Peace who visited Internally Displaced Persons (IDP) camps in Chad in 2007. Children were given pencils and paper and asked about their hopes for the future and their strongest memories. The drawings depicted scenes of unspeakable horror in Darfur showing government forces burning villages, raping, killing, and mutilating. Some of the children’s drawings were more graphic than others but all of them recounted images of what they saw and experienced. Many were used as contextual evidence in the ICC trial in The Hague against Omar al-Bashir, which resulted in indictments against him for war crimes, crimes against humanity, and genocide. In 2014 Waging Peace donated the drawings to The Wiener Library. 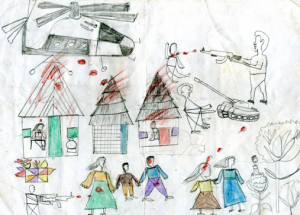 Responses from the international community

Despite UN actions and peace agreements, international efforts have failed to stop the ongoing violence to this day, 15 years from the start of the genocide. The current UN Peacekeeping mission, UNAMID, has been critically under-supported and underfunded, and is now on its way to a full exit, despite the fact that the need remains great.

One of the most significant developments in the international response to the genocide was the indictment of President Omar al-Bashir. A spokesperson for the ICC stated that al-Bashir was accused of:

‘Intentionally directing attacks against an important part of the civilian population of Darfur, Sudan. Murdering, exterminating, raping, torturing and forcibly transferring large numbers of civilians and pillaging their property’.

Following the indictment, the government expelled all humanitarian organisations, which had provided more than 50% of Darfur’s humanitarian needs.

The conflict has worsened since 2016 with the alleged use of chemical weapons in Darfur against civilian populations in 2016.

Over the last 15 years, while the genocide in Darfur has resulted in the deaths of hundreds of thousands of people and the displacement of millions, little has been done to stop the genocide. Member states in the Security Council have failed to provide support of UNAMID, while NGOs have not been allowed to travel to Darfur to administer vital aid, which is so sorely needed.

April 2018 marks 15 years since the start of the Darfur genocide.

Find out more about Waging Peace on their website.