Holocaust Memorial Day (HMD) Youth Champion Charlotte Lee, tells us about how she marked HMD 2014 and used the power of social media to reach beyond those attending.

Studying history at the University of Sussex has instilled within me a deep conviction that we should strive to learn lessons from the past, in order to better our future. It was for precisely this reason I was driven to mark Holocaust Memorial Day (HMD), and so in September 2013 I attended a training workshop run by the Holocaust Memorial Day Trust (HMDT).

I had initially heard about the HMD Youth Champion Programme after inquiring about volunteering opportunities. The training day was a fantastic experience, and was designed to equip young people with the skills to organise their own events for HMD 2014. After attending the session, I felt empowered and inspired to organise my own activity for HMD, alongside participating in an event with Sussex University’s Centre for German-Jewish Studies. 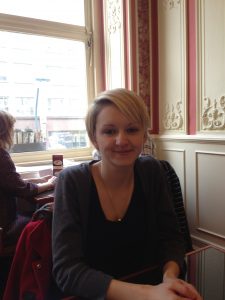 My event took the form of a screening of the film The Pianist, which tells the story of the Polish-Jewish pianist Władysław Szpilman. The film is particularly relevant to the 2014 theme of Journeys, as it follows Szpilman’s own journey, as well as those of his friends and family members. Materials provided by the HMDT were displayed around the room during the screening so that students could learn more about the Holocaust, those persecuted by the Nazis and subsequent genocides in Cambodia, Rwanda, Bosnia and Darfur. Those who attended were each provided with a luggage tag featuring information about someone persecuted during the Holocaust. They were encouraged to reflect upon these details, and were asked to share the information on the tags that evening on social media. I wanted to send the information on a virtual journey of remembrance and to encourage those who attended to reflect upon the individual journeys of those who experienced persecution under the Nazis.

In addition, I was privileged to join the Holocaust Memorial Day event organised by Sussex University’s Centre for German-Jewish Studies. At the event, Anita Lasker-Wallfisch spoke about her own journey during the Holocaust. Anita was sent to Auschwitz in 1944 for attempting to escape from Germany using forged papers and she was recruited into the Auschwitz women’s orchestra by the conductor and prisoner Alma Rosé. Ultimately, it was Anita’s musical ability that saved the lives of both her and her sister Renata. They were transferred to Bergen-Belsen, and subsequently liberated in 1945. Anita became a world-renowned cellist, and went on to co-found the English Chamber Orchestra.

After giving her speech at the event, Anita participated in a chaired discussion with her daughter Maya about the impact the Holocaust had on their family. This discussion really reminded me that the journeys of Holocaust survivors did not end upon liberation – surviving genocide has a profound effect on the lives of those who survived and their families for generations after the atrocity has occurred.

Having had the opportunity to become a Youth Champion with HMDT, I would definitely encourage other young people to do the same. It is an extremely thought-provoking experience, which leads you to reflect on the power of remembering in order to work towards ending hatred and discrimination today. The Holocaust and subsequent genocides demonstrate the extent of humanity’s capacity for cruelty, mass murder and persecution of the other. They are a constant reminder of our need to be vigilant. We should never forget the scale of Holocaust and genocides that have occurred. But we must also remember that while genocide is an example of mass killing, it is a very personal experience to each person affected by it, and that ultimately the mass tragedy is a culmination of individual and personal experiences of suffering.

My reason for taking action to raise awareness of these issues is because I strongly believe that we need to prevent such events from happening again. Genocides have continued to occur since the Holocaust, and the Genocide in Darfur continues today. There is no better time than now to take action so that the next time we say ’never again’ it will truly be the last.

If you are a young person aged 13 – 24, passionate about human rights and creating a future free from hatred, then you can find out more about the HMD Youth Champion programme on our website.