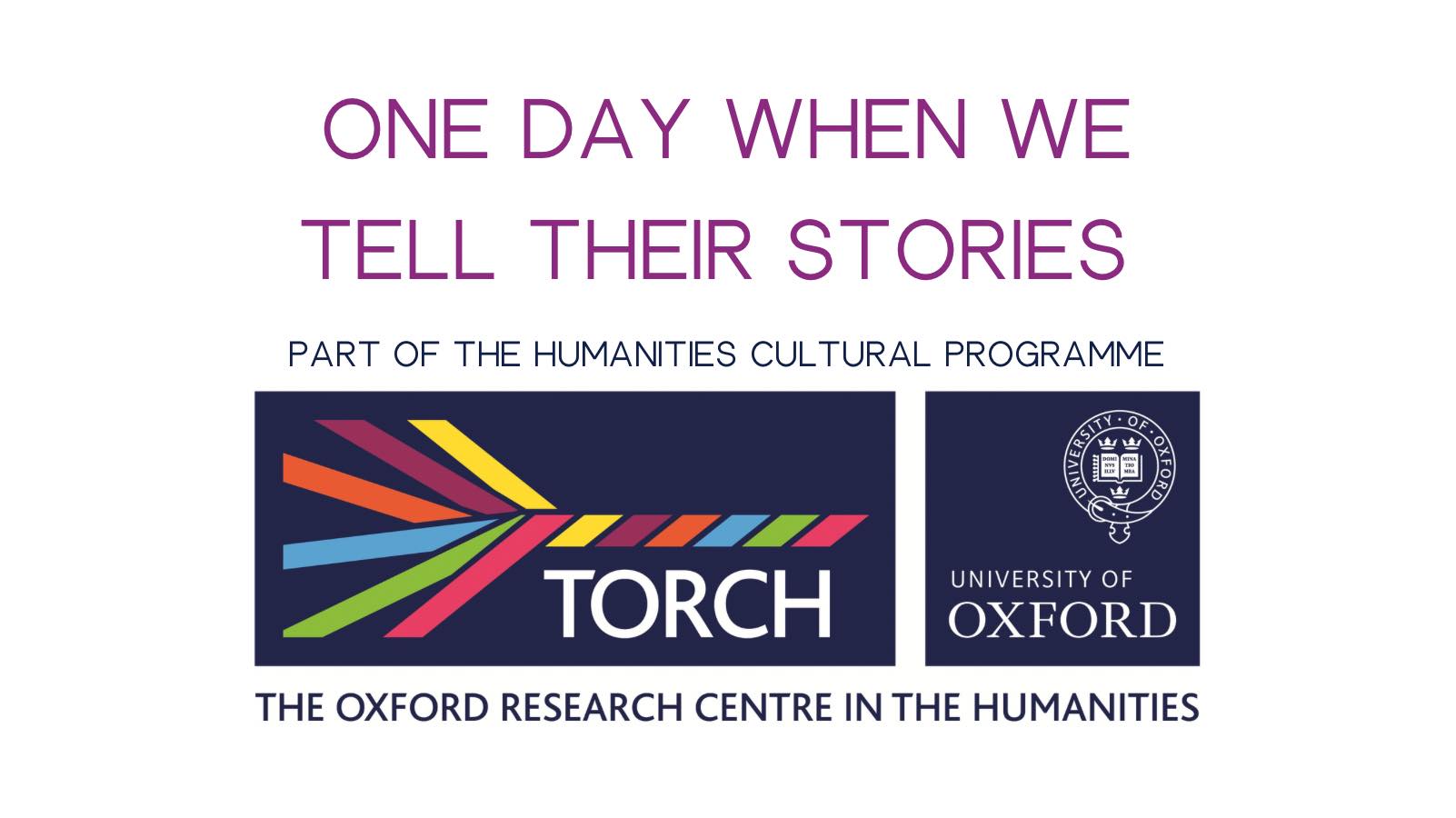 Oxford Holocaust Memorial Events Series: One Day When We Tell Their Stories

Welcome to the Oxford Holocaust Memorial Events Series 2022, part of the Humanities Cultural Programme. Each year, on Holocaust Memorial Day (27th January), we come together to remember the six million Jews killed during the Holocaust and the millions who suffered under Nazi persecution and in subsequent genocides in Cambodia, Rwanda, Bosnia and Darfur. The theme for HMD 2022 is ‘One Day’, encouraging us to think about the individual days in history that hold extreme significance, the days when life changed for victims of genocide, and the day in the future without genocide towards which we all strive.

But ‘One Day’ also acts as a sombre reminder that a day will come when Holocaust survivors are no longer around to share their powerful testimonies. On that day, it will fall to us to tell their stories. This events series builds on the online Oxford Holocaust Memorial Lecture Series in January-February 2021, bringing together high-profile individuals from the UK's Holocaust commemoration community in person for open discussion and bridge building between members of the University and influential figures in political, civic, academic, and public life.

Although 77 years after the end of the Holocaust, its history and memory remain important for a society facing rising antisemitism, contemporary genocide, and international humanitarian crises. Learning and reflecting on the Holocaust thus encourages us to consider what we want our common future to look like. This series, aware that one day survivors will not be around to tell their stories, asserts the responsibility of younger generations to carry their memory.

CONFIRMED DATES
OxHMD22 - Film Screening and Q&A: The Donkey Field
Sarah and John Dobai
Magdalen College Auditorium
Thursday 20th January 2022, 2-3:30pm
This new film installation created by Sarah Dobai (the daughter of Holocaust survivor John Dobai) is based on an account of events in Budapest in 1944, and focuses on the impact of discrimination, persecution, and displacement on a child. The work builds on the links between an antisemitic attack on the child on a piece of common land known locally as “the donkey field” and the story of the persecution of Balthazar the donkey’ in the acclaimed film Au Hasard Balthazar (Robert Bresson, 1966). Seen from the point of view of the artist’s family member, a boy who was ten at the time, the film portrays the boy’s experience of the traumatic events of that year when he and his mother are forced to move into a Yellow Star House and their attempt to escape by going into hiding fails. At this event, Sarah Dobai will speak briefly about her film before a screening, followed by a Q&A with her and her father.

OxHMD22 - ONLINE – The Importance of Personal Stories of the Holocaust
Robert Rinder MBE in conversation with Kirsty Robson
Tuesday 25th January, 6pm
Known to most people as a TV judge, Robert Rinder MBE shared his history of the Holocaust on TV in a series of programmes including Who Do You Think You Are? and My Family, The Holocaust, and Me, where he took the children and grandchildren of Holocaust survivors to retrace their relatives' footsteps and discover their full stories. In conversation with activist and advocate Kirsty Robson, Rob will discuss his experience of discovering his family’s connection to the Holocaust and sharing it with the public - and the role that telling these stories has in tackling racism and intolerance today.
Sign Up Here: https://forms.office.com/r/x4ezR1PtC4

OxHMD22 - ONLINE - Survivor Testimony: From Yellow Star to Pop Star
Dorit Oliver-Wolff BEM
Wednesday 26th January, 6pm
Dorit Oliver-Wolff is a survivor of the Holocaust in Hungary who became an international pop star after the war. In this event, Dorit shares her incredible life story. Aged just six, she was forced into hiding as Jews were rounded up and deported to Auschwitz from Hungary. Her story is one of danger and narrow escapes during the Holocaust, followed by a remarkable jounrey through post-war Europe as her music career began. Author of the book ‘From Yellow Star to Pop Star’, Dorit’s incredible character shines through in everything she does; aged 83 in 2019, she appeared on the TV show ‘First Dates Hotel’.
Sign Up Link: https://forms.office.com/r/tKiYZuJZ8h

OxHMD22 - ONLINE – Oxford Interfaith Forum Holocaust Memorial Day Speaker
Dame Stephanie Shirley
Thursday 27th January, 6-7pm
Led by the Oxford Interfaith Forum, Dame Stephanie Shirley, who came to the UK on the Kindertransport, will speak about her experiences of building a new life in the UK after the Holocaust and the impact that it had on her family. The talk will be followed by a Q&A led by Barnabas Balint.
Sign Up Link: https://docs.google.com/forms/d/e/1FAIpQLSdtZnMNyy0FY2avlyzYi1v9Qe4iuqcXD09Z4y4Tc4l_Uq2xWg/viewform

OxHMD22 - ONLINE - Remembering the Holocaust in the UK: Challenges and Opportunities
Martin Winstone in conversation with Eloise Bishop (University of Glasgow)
Thursday 3rd February, 6pm
Commemorating Holocaust Memorial Day has become a significant part in the UK’s calendar, with civic, religious, political, and community leaders coming together every year in remembrance and thousands of events happening in local areas across the country. The launch of the UK Holocaust Memorial Foundation and the building of a UK Holocaust Memorial in Victoria Tower Gardens seeks to embed Holocaust remembrance and education at the heart of UK civic life. In this event, we hear Holocaust Educational Trust Regional Ambassador Eloise Bishop in conversation with the project historian for the UK Holocaust Memorial Foundation, Martin Winstone, about the challenges and opportunities facing Holocaust remembrance in the UK.
Sign Up Here: https://forms.office.com/r/wjbXtCkKFS

DATES TO BE CONFIRMED
OxHMD22 - Book Talk: Lily’s Promise: How I Survived Auschwitz and Found the Strength to Live
Lily Ebert MBE & Dov Forman
Worcester College
Potential Dates: 6th or 13th February
When Holocaust survivor Lily Ebert showed her great grandson Dov Forman a bank note she was given after liberation, he started an online search via social media and successfully tracked down the soldier who gave it to her. Their reunion 75 years later captured imaginations across the country and was widely covered in television, newspapers and radio. They have since written a book together, published by Macmillan in 2021, sharing both Lily’s memories and Dov’s journey of discovery. Here, we hear from them about their book and their experiences.