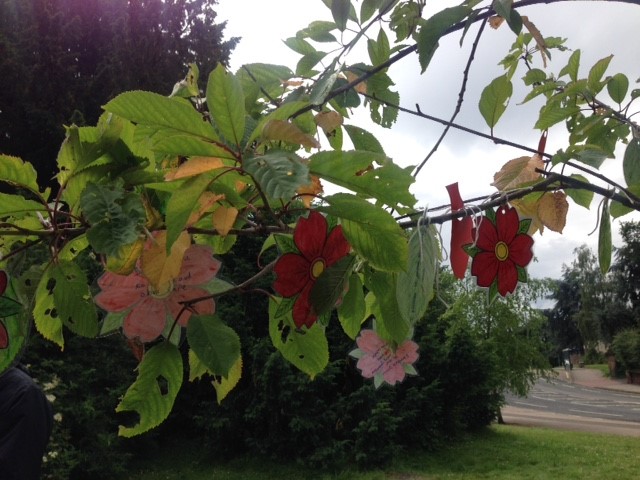 Messages of hope and peace

The Shropshire Council approach towards commemorating the Holocaust and other genocides is very much about messages of hope and peace, that will grow through the children of the county, and through the planting with them of a memorial cherry tree orchard of remembrance across our county.

We began planting our orchard with a first cherry tree at Mereside School in Shrewsbury in 2015, and will return to measure it this year, as we do every year. This year’s event will be on Tuesday 25th January, at 1030a.m. that day. The tree is just outside the school, near a playground, and the children of the school take great pride in looking after it.

Each year, we choose a different primary school in a different location of the county, with whose children we plant a new cherry tree and hold an interfaith service in which we talk about the theme for that year.

The local vicar in each location delivers the Shropshire prayer, which is then said at the Mereside tree by Reverend Ken Chippindale or by another representative of the Shrewsbury Interfaith Forum. Mr Mark Michaels and Imam Sohayb Peerbhai from the South Shropshire Interfaith Forum share their perspectives on the theme for the year, and the local Shropshire Council councillor or representative helps with the planting and with the lighting of a candle.

This year, we are planting a tree at Sheriffhales Primary School which is a small rural school in the far east of the county. We are very pleased that we will be able to hold a socially distanced ceremony in the grounds of Sheriffhales School, where the tree will be the first flowering tree that they have welcomed to their site. The ceremony will be at 1045a.m. on Holocaust Memorial Day, Thursday 27th January.

There will then be fifteen trees altogether, with flowers and fruits on the first trees already, and more to come from the younger trees as they grow and flourish in the care of local schoolchildren and local communities.

Shropshire is the second largest inland county in England, after Wiltshire, and is ten times the size of all the inner London Boroughs put together: with somewhat less people. The population averages out at only around one person per hectare, and we have a very scattered population of market towns and rural areas.

In 2015, we looked at how we could commemorate the Holocaust and other genocides in ways that would resonate for children and young people in Shropshire. This was partly because one of our secondary schools, Church Stretton, were hosting one of the seventy special Anish Kapoor candles designed to mark the 70th anniversary of the liberation of Auschwitz.

Secondary schools study the Holocaust and other genocides; primary school children do not. And yet if we can get these children to think about the messages of the Holocaust, in ways that are age appropriate, they can take this understanding with them as they grow.

And what could be simpler to understand, in some ways, than the planting of a tree, with all the messages of memory, nurture, resilience and endurance that this brings.

And what could be better than to plant a tree in a different location in the county every year, covering every quadrant, and growing an orchard of remembrance.

It needed to be a flowering fruit tree, to align for us with the importance attached by the Jewish, Muslim and Christian faiths to trees that will bear fruit. We managed to find a variety called the Black Oliver, which is native to the West Midlands. After help from Mr Mark Michaels from the South Shropshire Interfaith Forum, who spoke with his rabbi, the suggestion was agreed and a tree was found through the Incredible Edible scheme in operation that year.

Our first tree was planted in Mereside in the middle of Shrewsbury in 2015. We developed an ecumenical order of service, including a prayer that we now have every year; Mr Michaels brought the candle up from Church Stretton; other members of the two interfaith forums joined in the service with us and four children from the school; and the local councillor and the portfolio holder helped the children to plant the tree.

The candle then went back to Church Stretton, before being carried by students from that school to a final resting place at the site of a concentration camp near Berlin.

The tree is growing beautifully, Mereside look after it with great care, and we return every year to see how it is growing.

We bought a three-wick candle used in subsequent years, indicating the interlinking of the three world faiths of Christianity, Islam, and Judaism. This is in a purple bowl, which is the colour used by the HMD Trust.

What did we do last year?

In 2021, as well as a cherry tree at a school in Market Drayton, we planted a cherry tree at Shirehall in Shrewsbury, marking the liberation by British troops, including those from Shropshire, of the Bergen-Belsen concentration camp, and the role of the armed forces in humanitarian efforts in Bosnia. The trees were planted during lockdown by one of our arboriculturalists, John Blessington.

Children from Mereside helped to dress the tree with flower and leaf promises, in a ceremony outside Shirehall in Shrewsbury on Tuesday 6th July 2021. This linked in with Remembering Srebrenica Day, which falls on Sunday 11th July, and for which the 2021 theme was “rebuilding lives”, as well as with ongoing local efforts to mark the Holocaust and other genocides

The ceremony focussed upon prayers and memories, with Wing Commander Turner reading a Christian prayer, and Mr Michaels and Imam Sohayb Peerbhai from the South Shropshire Interfaith Forum reading a Jewish prayer together. These were both written for Srebrenica.

Everyone then came together to dress the cherry tree, before Reverend Ken Chippindale, from Shrewsbury Interfaith Forum, closed the ceremony with the reading of the Muslim prayer for Srebrenica.

“We must never forget the humanitarian roles played by the armed forces, and we must never forget those who died and those who carry on without them. The children have reminded us of this, with their words and their actions today, where they have dressed the tree with their promises. I promise on behalf of Shropshire Council to help to look after our Remembering Srebrenica tree, and I know that Wing Commander Turner, on behalf of the armed forces, will help to do the same.”

Each year, as the orchard grows, we continue to gain from the support of the interfaith forums and from Mereside as our first school.

We pool our ideas and our resources, to share with all schools and to make the most of the theme for the year and the support we get from the HMD Trust.

We are also pleased to add Shropshire Archives, with pleasure and gratitude, to our grouping of active supporters.

They helped us with an online archive resource with regard to the local armed forces, and also found the following information about local support for Jewish children during the Second World War.

• A document file containing the minutes of the Mayor of Shrewsbury’s Committee for Jewish Refugee Children, detailing support and fundraising activities;
• Records relating to Bunce Court School for German Jewish refugee children, at what is now Trench Hall, near Wem. We have pictures of the founder Anna Essinger and her two sisters, another of the cook, Gretl Heidt, and another of the children, playing safe from harm. The photo of the three sisters shows (left to right) Bertha Kahn, Paula Essinger and Anna Essinger.
• Further documents talking about Anna Essinger’s experiences in Germany, and the setting up and running of the school during the war years. The school was evacuated from Kent to Trench Hall as a safe location during the war.

The minutes from the Mayor of Shrewsbury’s committee are written in the copperplate writing style of the time, with pages reproduced in the online gallery as an example.

The Archives Service would be happy to assist anyone wishing to know more about these efforts, which may be seen very much as a forerunner to the support given by communities across the county to help Syrian refugee families to settle here in the present day.

In so doing, we echo the words of Mr Mark Michaels, for the South Shropshire interfaith Forum, who said in 2020 that: “As we lose the last survivors who can give a first-hand account, it becomes even more important that we continue to communicate this essential message to future generations.”

In planting these trees, our aim is to provide a fitting memorial for those who survived the Holocaust and other genocides, and for those who did not, and for our orchard to grow with the children and spread its messages of hope and of peace.